Using the example of a brick plant, the »BioBrick« project shows how process heat and residues from biomass plants can be used for industrial brick production. In the project, a wood gasifier provides the heat (500 - 1000°C). The carbonaceous residues from the gasifier are used as porosification material in the brick. This cascade utilization reduces disposal costs, improves the product properties of the brick, saves fossil fuels and increases the cost efficiency of the process. The project consortium consists of plant manufacturers (Burkhardt GmbH) and users (Ziegelwerk Ernst GmbH & Co. KG). The project coordination and accompanying research is carried out by Fraunhofer UMSICHT.

Under which framework conditions would the operator of a brick plant rely on renewable energies? This question occupied the researchers at Fraunhofer UMSICHT and was the motivation for the »BioBrick« project. The background of the project is to promote the use of biomass in industry, particularly in the area of process heat supply, in order to displace fossil energy sources and save CO2 emissions.

The project has two priorities:

In the first focus area, a concept is being developed with the plant manufacturer and the brick plant for the integration of a wood gasification technology and a combined heat and power plant into the site's energy supply. At present, the tunnel kiln for the production of bricks is heated with natural gas. In order to reduce the demand for natural gas, a wood gasifier is integrated to produce synthesis gas. In the first scenario, this will be used to operate a CHP unit, whose waste heat will be used to heat buildings on the site and generate electricity for production. As an innovative option, it is being investigated whether the hot exhaust gas stream from the CHP (upstream of the heat exchanger) can be used directly as process heat for heating the tunnel kiln. In the second scenario, the synthesis gas from the wood gasifier is used for production via modified gas burners.

The second focus of the joint project is the material use of the gasifier residues as porosification material in bricks. The focus is on the development of advantageous recipes and the question of how the gasifier residues can be optimally introduced into the brick and distributed therein. The different possibilities are tested and evaluated using test procedures. In the case of bricks, the focus is on strength, dimensional stability and thermal insulation properties, while variations in ash content, ash composition and carbon content are investigated in the initial substrate.

After the preliminary tests in the pilot plant, the gasification coke is delivered to the brickworks and introduced into the production process in defined test batches. The quality of the finished bricks is tested by an independent external laboratory.

Fraunhofer UMSICHT is responsible for the coordination of the project as well as the conception of the energy supply and integration into the site. The company Burkhardt GmbH and the brick factory Ernst GmbH & Co. KG focus on the material integration of the gasifier residues.

Simplified presentation of the BioBrick project 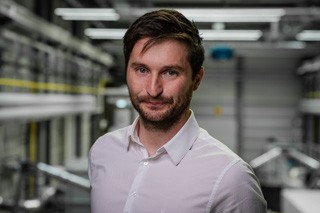