In the »To-Syn-Fuel« project, a process developed by the Fraunhofer Institute UMSICHT for the production of fuels from biomass residues was implemented on a demonstration scale. So far, more than 50,000 litres of biogenic crude oil have been obtained from 500 tonnes of sewage sludge. The construction of a large-scale demonstrator in the Bavarian town of Hohenburg (district of Amberg-Sulzbach) was funded with 12.5 million euros as part of an EU project (11 European partners). At the end of the project, a test vehicle with the fuel completed a round trip of more than 2000 kilometres through Europe.

Project manager Dr. Robert Daschner from Fraunhofer UMSICHT summarises the results of the project: »With To-Syn-Fuel, we were able to demonstrate for the first time on an industrial scale that biogenic residues and waste materials can be converted into thermally stable, liquid bio-oils. The further processing of such oils in a refinery seemed unthinkable just a few years ago.« In the project, the oils were converted into fuels via a hydrogenation process. With appropriate further processing, they meet the most important standard requirements for petrol (EN 228 ) and diesel (EN 590). They are therefore miscible with conventional fuels and can be used with the same performance without engine modifications. The CO2 footprint per kilometre driven is reduced by over 85 percent. If the solid carbon (biochar) produced in the manufacturing process is stored, CO2-negative fuels can be produced on balance.

The Fraunhofer scientists assume that the production costs for the alternative fuel could be comparable to those of fossil fuels, depending on the size of the production plant, the type of end product and taxation. They would thus be above ethanol and biodiesel from energy crops, but below other alternative fuels, for example from power-to-x processes. Unlike conventional biodiesel, they do not compete with food production.

During the project period (2017 to 2022), more than 500 tonnes of sewage sludge were converted into 50,000 litres of oil, from which a total of 40,000 litres of petrol, diesel and paraffin can be obtained. In addition to sewage sludge, other biogenic residues and waste materials can also be used in the process, e.g. fermentation residues, liquid manure, biowaste or wood waste. According to Fraunhofer calculations, the technical potential of such residual and waste materials is several million tonnes in Germany alone. An additional advantage in the recycling of waste: the disposal costs for municipal households could be reduced.

The Fraunhofer researchers see as an area of application above all areas of mobility that are difficult to electrify in the short term, for example air traffic, shipping or heavy (rail) freight traffic. Here, emissions could be saved quickly. The new version of the EU Renewable Energy Directive (RED II) also stipulates that the minimum proportion of progressive biofuels (i.e. based on waste and residual materials, for example) should increase from 0.1 percent in 2021 to 1.75 percent in 2030.

The oils produced in the Fraunhofer process can be further processed or co-processed in conventional refinery processes. In this way, the entire product spectrum of a refinery can be covered in addition to fuels. In this way, for example, chemicals and intermediate products for plastics could be produced with a reduced CO2 footprint.

The core technology used in the To-Syn-Fuel project is the TCR (Thermo-Catalytic Reforming) process developed by Fraunhofer. Biogenic residues are heated at 450 degrees in a screw reactor in the absence of oxygen. Steam and a solid are produced. The solid, which is similar in consistency to plant charcoal, is selectively reacted with the steam. This significantly improves the quality of the subsequent gas and oil products. The process steam is cooled down so that an oil-water mixture condenses out. The water is extracted and a bio-crude oil remains, comparable to a fossil mineral oil. The remaining hydrogen-rich synthesis gas is purified and can be used for syntheses or as an energy source. The coal can be stored or used in other applications. The preliminary developments for TCR technology were supported by the Bavarian Ministry of Economic Affairs. Bavaria's Minister of Economic Affairs, Hubert Aiwanger, said: »Advanced biofuels from residual and waste materials are a building block on the way to climate-friendly mobility. Bavaria will continue to pursue the development of such fuels in the future.«

2000 kilometre round trip with stopover in Brussels

At the end of the project, a production car was sent on a 2000-kilometre round trip through Europe as a test vehicle with the generated fuel. During the stopover in the Czech Republic, the team met the German rally world champion Walter Röhrl, who was impressed by the technology. During the stopover in Munich, project manager Dr. Robert Daschner explained the project to Bavarian Minister of Economic Affairs Hubert Aiwanger. The following week, the test vehicle was presented in Brussels at the EUSEW 2022 (European Sustainable Energy Week). The project was completed in Hohenburg at the end of September.

Research and development on TCR technology is to continue: Fraunhofer scientists are currently working intensively on the use of coal, the improvement of hydrogen yield and the recovery of ammonia from nitrogen-rich feedstock. The first industrial application of the technology is also being planned: the Bayernoil refinery wants to implement the Fraunhofer technology on a larger scale and intends to process up to 400,000 tonnes (100,000 tonnes dry matter) of sewage sludge by 2030 at the latest, which would be around 40 percent of Bavaria's production. The sludge will primarily be used to produce sustainable aviation fuel. 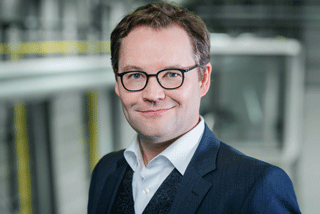